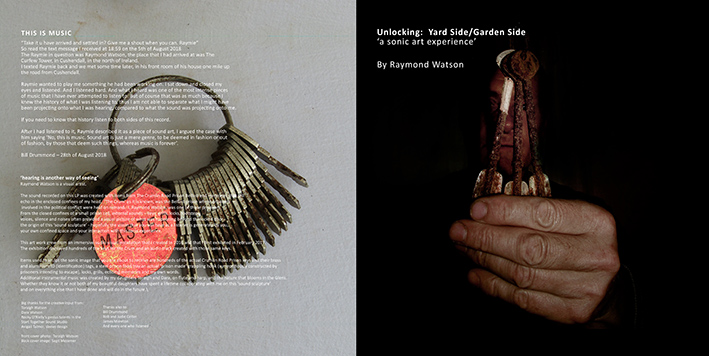 ‘hearing is another way of seeing’

Raymond Watson is a visual artist.
The sound recorded on this LP was created with items from The Crumlin Road Prison Belfast and memories that still echo in the enclosed confines of my head.  ‘The Crum’ as it is known, was the Belfast prison where prisoners involved in the political conflict were held on remand.  From the closed confines of a small prison cell, external sounds – keys, grills, locks, footsteps, voices, silence and noises often provided a visual picture of what was happening beyond the locked door – this is the origin of this ‘sound sculpture’.  Hopefully the vision that you will have as a listener is generated by you, your own confined space and your interaction with this sonic experience.

‘I was invited to listen to Unlocking during August 2018.’
‘I sat down and closed my eyes and listened. And I listened hard. And what I heard was one of the most intense pieces of music that I have ever attempted to listen to. I recommend that you listen to both sides of this record.
‘After I had listened to it, Raymie described it as a piece of sound art, I argued the case with him saying – No, this is music. Sound art is just a mere genre, to be deemed in fashion or out of fashion, by those that deem such things, whereas music is forever’.

Click below to purchase the Unlocking Vinyl LP at £25.00 Free Delivery within Ireland and UK